I’m so devastated that this current US administration has given a green light to mining in Bristol Bay, Alaska (on the rightful land of the Yup’ik, Dena’ina, and Alutiiq nations). This pristine watershed houses the largest salmon run on the continent making it invaluable to the species and those (like the endangered whales) whose lives depend on them. The salmon run and watershed is also pivotal to the way of life and sustenance of local Indigenous nations as well as fishing communities. 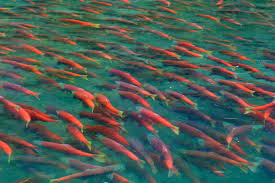 The damage this mine in this location could do to local ecosystems human and otherwise is catastrophic. Moreover, with only a few years left to stop the “tipping point” of climate change, we need a cultural shift away from environmentally damaging practices, such as mining, and toward practices that can sustain life. The salmon industry in Bristol Bay is already just such a practice, generating 1.5 billion in revenue and 14,000 jobs. We must agitate politicians and support Indigenous resistance.

We need to make phone calls to politicians. Assistants record the number of people who call about an issue. The record is sent to those in charge. It doesn’t risk ending up in a “junk” folder in email. To protest Bristol Bay Mining we need to call the following two senators:

I know. We have phone anxiety. At least I do. Two things help me with this:

Sometimes it takes a bit of digging to separate the colonially led organizations from the are led Indigenous people. Indigenous nations are the experts on this land and its needs. They are the traditional and rightful inhabitants. The work for climate change resistance has to honor both expertise and sovereignty to have substantive changing power.

The United Tribes of Bristol Bay has been bringing astounding leadership to the fight to protect their homelands and these eco-systems. It is a strong coalition between 16 different nation’s councils. I highly recommend making a donation to support their work to protect Bristol Bay, if you have the capacity. They even have some artful clothing you can purchase! I will now be entering fall with this hoodie. It’s a bonus.

The news of continued colonial violence (and yes, destroying people’s homelands for profit is colonial violence) from this administration is really upsetting. Please join me in taking some simple, concrete steps to do what we can to counter it and preserve our home planet.